At last night's Teabagapalooza in Tampa, the Teapublicans had a "debate." Don't know who won, given that they're all losers, but Ron Paul and his cheerleaders in the audience showed their true scumbag colors:

Can't afford health insurance? Dying because of it? The doddering geriatric coot Paul and his insane, sociopathic "pro-life" teabaggers say you should die--"screw you, I've got mine"--and they applaud themselves for saying so. Imagine their orgasmic joy if they'd been able to watch this man's house burn for lack of $75! Even better if he was trapped inside, right? Screw him, he didn't pay!

Assholes. Assholes and hypocrites.
Posted by JW at 9:30 AM No comments:

Pic of the Day: Heroes. 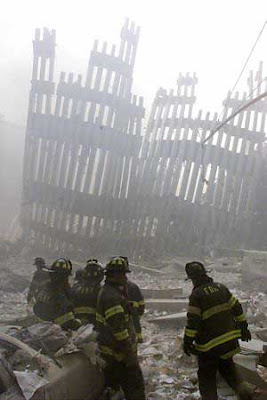 Courage can be defined as being afraid and still doing what you have to do.

Heroes are just regular people who do important things at the right time.


I've had this picture in my "History" folder for a decade, now. When I look at it, I don't feel patriotic. I feel humbled that there are people who risk their lives to do the right thing.
Posted by JW at 4:25 AM No comments:

Pic of the Day: Faith-Based Initiative 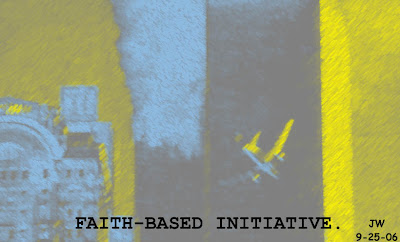 Religious conservatives committed the evil of 9/11.

Another set of conservatives have ceaselessly exploited the events of that day to keep Americans in fear, so that those conservatives may consolidate their grasp on power.

They don't give a crap about the dead firefighters, the dead cops, or the people in those buildings and planes as anything other than a way of getting more control over our lives. They don't care about the men and women dying from illnesses caused by breathing the smoke, dust, and ash at Ground Zero. They don't want to represent the interests of regular people. They're only really listening to selected moneyed traitors of the upper 2%. The "Evil" and "Scumbag" tags are for them.

Isn't it time the rest of us took it away from them? Isn't it time to stop letting them trample our Constitution, our flag, and our country?

We need to make 9/11 a tribute to the people who died by turning our backs on the scumbags who have wiped their feet on everything this country's supposed to stand for.
Posted by JW at 3:22 AM No comments:

One of my daily "must-read" blogs is Stonekettle Station, run by Jim Wright. He lives in Alaska, surrounded by Teabaggers and other right-wing idiots, true believers who think Palin's the answer to this country's important questions instead of an also-ran punchline. People who think Bachmann is a serious contender who will sweep Obama from the White House and restore racial purity to the nation's leadership. People who know less than nothing about economics, but demand that the government balance its checkbook. People who think Reagan hung the moon, and if we really really really TRY this time, trickle-down will WORK this time, dammit!

He brings righteous anger, contempt, sarcasm, and a desire to see things made right together in his writing. Makes me jealous, really--I'd like to be as thoughtful and articulate, myself.

I learned something important, today, reading comments on his post on how Bachmann's getting financial instructions from her god via the post-hurricane flooding in the northeast:

Well, for the record, I know many hundreds of Christians who are wonderful people and if anybody deserves to go to a heaven and live forever, they do. And on that note, I know a large number of Muslims who are of similar nature.

But it's people like Bachman, Perry, and the smug holier than thou fundamentalists who continue to presume to speak for their miserable angry small minded rat bastard of a God and keep attempting to turn the country into some miserable small minded rat bastard of a theocracy that are getting on my nerves. I will continue to ridicule these people and their silly stupid bullshit as long and as loudly as it takes.
September 2, 2011 11:58 AM
Antthenut said...

I always wondered if God uses weather to punish the wicked, why is there always so much collateral damage? You would think that an all-powerful being would be able to aim his wrath more selectively. Maybe he'll be unleashing his hate-seeking missile on a gaggle of surprised teabaggers soon!
September 2, 2011 12:54 PM
Anonymous said...

pssst, Antthenut, I believe a group of teabaggars is known as a scrotum


This really ought to become a meme!
Posted by JW at 1:48 PM No comments: