Twenty years ago today, Jim Barrett and Dr. John Britton were murdered by a religious terrorist.

The clinic where they died was firebombed January 1, 2012 by some homeless jackwagon who'd been watching the weekly terrorist "protests."

The clinic reopened in a different location, in the same shopping center as a Hobby Lobby.

On this day in 1994, Paul Hill walked up to a pickup truck in the driveway of a Pensacola clinic and killed Jim Barrett and Dr. John Britton with a shotgun.

I stood in a parking lot across the street with some of the other clinic escorts (Jim was one of ours) for a few hours. The bodies were laid out and covered with sheets while the crime scene guys did their thing.

I never met Dr. Britton; he was one of the volunteers who stepped up when David Gunn was murdered barely a year before.

Jim was a good guy, a sort of grandfather figure. He's buried at Arlington:

I'm gonna hoist a drink in his honor sometime today and hope that someday crazy religious douchebags will no longer exist.


Tentatively optimistic in the wake of Tuesday's distributor swap. I've made one adjustment so far, turning the distributor a bit clockwise after the starter struggled to spin the engine over.

This has been a consistent issue for most of the last five years and I'd always it was a starter issue. Especially when the engine was warmed up, the starter was working as hard as it could. I'm not a great mechanic, and I never thought that maybe the distributor was a bit too advanced or retarded, perhaps causing a buildup of cylinder pressure keeping the engine from spinning easily. Certainly sounded like it, especially Wednesday morning when I tried to fire it up. This time, the starter was dragged to a standstill, pushing hard against the crank--even worse than ever before.

After that little adjustment, though, the engine spins over at least twice as fast as before--strongly, no hesitations. Unheard-of in 5 years of tinkering!

This is all the same issue I've been trying to work out for a while, especially after getting stranded a few times in the last year. It seemed for a month or so that I made things better with the exhaust work I did in November, but that's also when the weather started getting cold.

As soon as things warmed up again, the drivability troubles started again--starter having trouble turning the engine, getting worse as the engine warmed up, dragging the battery charge down (and looking for all the world like a bad starter). Once the engine started (IF it started), it ran fine. Idle was a little ragged. Hard to judge gas mileage, since I hardly go anywhere lately. Haven't been to Fort Pickens since my back-to-back day trips in February of 2011 (here and here). Haven't been back to Fort Pike since my time and gas-wasting road trip out there in 2011. Power? Hard to tell there, yet, but if the starting issue is solved now, I'm up for a Pickens trip.
Posted by JW at 12:51 PM No comments:


Dropping the replacement distributor into the car took less time than finding the cap and rotor I needed from storage.

It only took a few bumps of the case counterclockwise and clockwise to get the engine started, then a smaller bit of turning it to find the sweet spot--well, the temporary sweet spot. As soon as I got the thing locked down for a test drive, it started raining. Drove it anyway. Seems smoother, can't smell it dumping raw fuel into the exhaust.

Next up is another round of tuning and tweaking that should take care of all the drivability issues I've been having for a few years--hard starting when it's hot, which gets me stranded and makes a-holes unhappy; rough idle, dumping fuel, impressive clouds of gray smoke that fumigate the area if I coast in third at highway speeds...poor car.

Assuming that's taken care of, all that's left is the leaking sunroof, rusted-out rear hatch, clutch, power steering, rear tires...radiator...air conditioning...stereo (still uninstalled more than a year later)...getting the dash back together...bodywork...muffler...
Posted by JW at 9:06 AM No comments:


The X-11's been running poorly lately, especially since the beginning of summer. I'm currently running a distributor and coil from an '85 S-10 Blazer. It works well enough, making a really nice, fat white spark, but I've never been happy with the installation. I had to make a bracket to mount the coil and wire up connectors for power and tachometer feed. None of it looks good. It seems to have a block of some sort on the casting restricting how far it can be turned (probably for emissions purposes), but all I'd need to do is loosen the hold-down, pull the distributor, turn the shaft just a little, and put it back. It's been a guessing game trying to get the engine timing dialed in ever since I put this distributor into it. It's really happy in winter, but I start having drivability issues once the weather warms up.

The distributor I'm testing in this video is identical to the X-11's original item, aside from being non-computer controlled. It's an all-in-one style with the coil built into the cap. Very clean installation, no external coil and wire, and the car's original wiring just plugs right in. There's nothing to keep it from being turned for more advance, either, so maybe the engine will have better hot-weather manners.

My test rig was powered by an old PC supply. I originally intended to run jumper wires to each of the distributor cap "towers" (where the plug wires connect) and even started making up some jumpers for the second half of the video, but at this point I was satisfied that it'll work, since I could hear a "chirp" from internal sparking where there wasn't a jumper and could see a good spark in the tester for those that were jumped.

I could have used a lab assistant, though, to see just how good that spark was. The last time I rigged up a test like this was for the distributor that I'm about to swap out of the car. My lab rat then was a co-worker who just couldn't resist the urge to touch the pretty white fire--and BAP!!. He jumped a couple of feet in the air. He didn't think the thing was going to work. Heheheh.

I still need to check out the vacuum advance and replace the cap and rotor, but now it's ready to drop in.
Posted by JW at 10:53 AM No comments:


Taking a break from the Lincoln/"The Car" project. But I had this idea for what was going to be a table showing how the four engine cycles (Intake / Compression / Combustion / Exhaust) overlap in the GM 2.8 Liter V6.

In one of my old auto mechanic books, there's a simple illustration of the overlap in a V8. I'd been meaning to do something similar to that for years just out of curiosity. I did scribble a table in my notebook last night, but when it came to copying that to a CAD drawing, I decided on a diagram instead. Think of it as a map of how the engine runs. 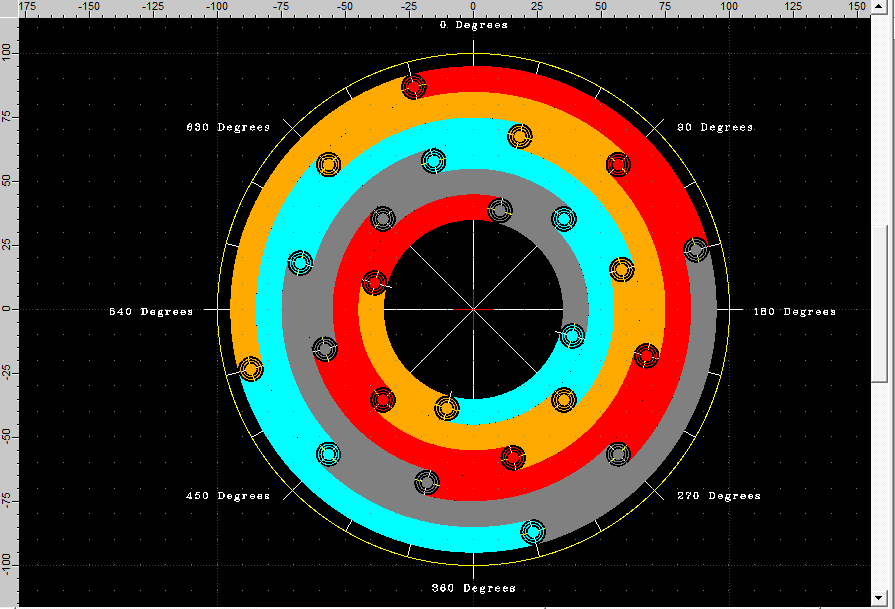 Red represents the combustion cycle (or "stroke"), where power is generated.
Gray is exhaust.
Blue is intake.
Orange is compression.

Each cylinder follows these four cycles (hence "four-cycle" or "four-stroke" engine). Technically, the intake cycle should be first, since everything else depends on that: air and fuel are drawn into a cylinder, the mixture is compressed, then it's ignited, and finally the burnt gases are pushed out of the cylinder.

I put the combustion cycle first on cylinder #1 (closest to 0 degrees) because getting all those things to happen properly depends on getting that cylinder set up properly (Top Dead Center) while the engine is being put together.

The wheel represents two full turns of the crankshaft, since it takes that long for a single cylinder to go through all four cycles--intake and compression in one, combustion and exhaust in the next.

The other pairs perform the same way, but overlap the rest in such a way that there's always one cylinder firing for every third of a rotation, or 120 degrees.
Posted by JW at 1:47 AM No comments: